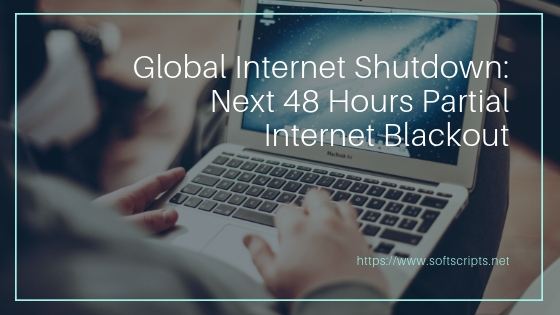 Have you read the breaking news?? Its crucial news for internet users. The news channel reported that global internet users might experience network connection failures as the main domain servers and its related network infrastructure will be down for some time. So, don’t worry if you face internet problem in 48 hours.

which can also be considered the world-wide web’s address book.

The organization who controls internet backend named as Internet Corporation of Assigned Names and Numbers (ICANN) is going to update the cryptographic key. This is used to protect the Domain Name System (DNS). DNS is the world-wide web’s address book. So, to update this address book, need that much time. They took these decisions to update the system to counter rising incidents of cyber-attacks.

But, you still don’t understand what is DNS and ICANN and how they work, right!! We have given some information about these for your understanding:

What is a DNS?

DNS i.e. Domain Name System is considered to be phone book of the internet. DNS is essential for well-functioning of the internet. DNS is nothing but the distributed naming system for computer, machines or any other resources connected to the internet or network. It has a long list of information along with domain names assigned to each of the participating entities.

Most of us don’t know we are actually using this every day by using and checking emails, etc. It is like a phone directory, all the information about IP address and domains are present. The directory is in number which is used to communicate between the computers.

If we enter the certain web address in the web browsers in our laptop or phones, it used this searched data to find the correct domain and internet protocol address (IP). Due to this, you are able to see the web page you actually need to see. Each and every web domain is present in this DNS directory. This is used to manage the web traffic and it helps you to redirect the corrected web page.

For example, when you type https://en.wikipedia.org , your INS i.e. internet service provider firstly look for DNS along with domain name. After finding it, it will translate into a machine-friendly language i.e. IP address such as 178.111.101.45. Finally, it will redirect your internet connection towards to your desired website.

As you read above, information in the DNS directory isn’t located at one location on the internet. The directory is distributed around the world.

What does the ICANN need to do?

ICANN i.e. Internet Corporation for Assigned Names and Numbers is the non-profit organization formed in 1998 which helps to ensure the network’s stable and secure operation and develops policy on the Internet’s unique identifiers by maintaining the database. It’s headquartered is in Southern California. It was primarily formed by US military during the cold war to manage and maintain the Internet. Currently, it is managed by a 16-member board of directors. In that eight members are a nominating committee, other six are of its Supporting Organizations and president and CEO are appointed by the board.

The main work of the ICANN is used to keep an eye on domain name registration process and assignment of Internet Protocol (IP) addresses to Internet Service Providers (ISPs) through its Internet Assigned Numbers Authority (IANA) group. It cannot control the content on the internet and stop the spams, it is used to maintain and coordinate the Internet Protocol (IP) addresses and the Domain Name System (DNS). ICANN is formed to manage the Internet not to control it.

Another well-known work of ICANN is the assignment of domain names. The famous and well-known domain names like as .com, .org, .net, etc are controlled by ICANN. Also, authorises country code domains such as .co.uk, .co.nz, etc.

Another more important role of ICANN is that it is the creator of the of the UDRP or ‘Uniform Dispute Resolution Policy’ that governs resolution of conflicts concerning domain name ownership. It was the first step towards modernization of the internet.

It is formed to regulate the internet and hold the stakeholder who try to control the internet. ICANN maintain the coordination of IP addresses. Currently, over 100 million domain names and 2 billion network addresses across 240 countries have been managed by ICANN.

Recent year due to technology improvement, security threats on the internet has been increased enormously. So, to improve the security measures ICANN took this step to update the encryption keys for the DNS addresses.

So, for while until the maintenance hours, the DNS and subsequently the web pages that it links to will be unavailable. Like it doesn’t even exist but only for that certain duration. Still, you can access some web page of that domain at very low speed. Though it is impossible to predict when the operators will notice this failure.

As per ICANN’s report, only 1% of the total internet users i.e. (around 30 billion people) around the world are expected to be impacted by the shutdown.

So, don’t worry too much its just 48 hours maintenance time. Thereafter you are able to use the internet at the desired speed. So, give some rest to your mobile phones and relax!! Still, you can use your internet during maintenance hours. Under maintenance doesn’t mean you won’t be unable to use the internet. That means you won’t able to see certain websites, web pages and web-based services and resources being unavailable for a certain duration of time. Things will be back to normal again once all security measures are updated.

You will be online within a few hours!!

Status of the KSK Rollover
The root KSK rollover occurred at 1600 UTC today, 11 October, with the publication of the root zone with serial number 2018101100. Please see the main rollover page for further information on the rollover.

1600 UTC, 12 October: In the first 24 hours after the rollover, there were very few reports of problems, and those were mostly fixed quickly.

And in india No Internet Shutdown Confirmed by Cyber Security Official