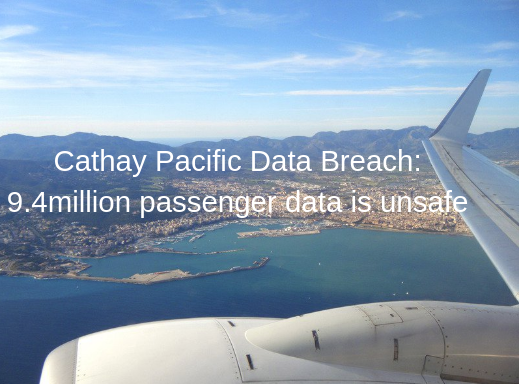 Yet, another data security breaches of the Famous International Airways- The Cathay Pacific. Alas! This seems to have become a trend – yes we are talking about data security breaches and the frequency with which they are happening. Get up in the morn, switch on your TV, browse your favorite news channel, and in the highlights, you find fresh news related to a fresh data breach of big and famous multinational companies.

On October 24th, it was flash news that data related to Cathay Pacific Airways data had leaked. The news announced that some unknown hackers had got access to the details of the clients of Cathay Pacific, and the personal information of nearly 9.4 Million passengers was breached.

In its defense, Cathay Pacific said that initially, they did discover some suspicious activities in the network way back in March 2018 and started investigating it. In May 2018, they confirmed that a data breach had occurred and the personal information of passengers had been hacked.

After this incident, the airways informed about this huge data breach to the police. A thorough check took place, in which it was found that the personal data included information like passenger’ names, date of births, phone numbers, nationalities, email ids, addresses, passport details, identity numbers, travel histories, and the number of times they were contacted by the customer service. In the case of a frequent flyer, the membership details that he/ she had opted for – All these sensitive details of 9.4 million trusted passengers of the Cathay Pacific were leaked.

Further, Cathay Pacific made it clear that a total of 840,000 passport numbers were accessed, and 245,000 identity card numbers of the Hong Kong citizens were accessed. In addition to this, details related to 403 expired credit cards and 23 credit cards along with the CVV Numbers i.e. the card verification number had been leaked.

However, the company was clueless as to whether the data hacked was being misused. It is found that each passenger succumbed to a different kind of data breach, the combination of the data breach for every passenger was not the same. The IT system of the Cathay Pacific Airways was also affected, this was the reason why Cathay Pacific kept its flight operations far from it. Thus, this ensured no impact on the flight’s safety.

Cathay Pacific is still in the process of contacting the passengers who are affected by this data breach and has been explaining in detail that the account, though accessed completely by the hackers, none of the passwords were compromised on.

CEO of Cathay Pacific, Rupert Hogg, personally apologised to the affected people about the incident that took place. He assured the people that they have taken all preventive steps towards cybersecurity. They are working upon the issue with a leading security firm, to strengthen the security, He promised that nothing of this sort would take place in the future ever again.

Not only Cathay Pacific, few weeks before this incident, data of the British Airways also got leaked. Airways are not the only victims to these breaches. Various other social networking sites also faced these threatening data breaches. The recent data breach related to Facebook, where personal information pertaining to 50 million users got hacked, and password reset messages were sent to 90 million users.

Later on, another big news hit the screens – Alphabet shutting down Google+ in the near future, due to the recent data breach. Here, the information of 500,000 people was exposed, which was due to the vulnerability in the application.

After facing these many data security breaches, the first question that arises in the mind is, Are the people giving their important and personal information, so that it gets hacked? Obviously not! People should be more careful towards all the information they provide and have more security checks. Even while signing up, they should opt for all the security options. It is recommended to add your mail id and password manually, rather than inputting them automatically and include 2-3 security questions. These meticulous practices, will prevent such attacks to the personal information, to some extent at least.