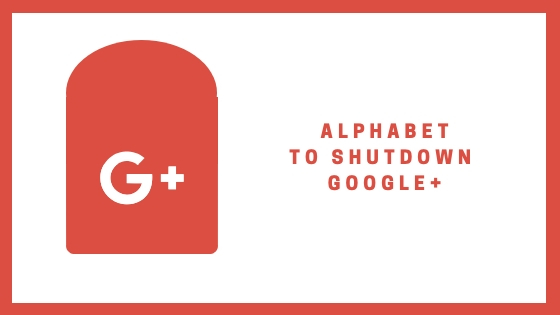 Google Alphabet is soon going to shut down the consumer version of social network “Google+”, after finding out that the data of 500,000 users have been exposed. This was due to the vulnerability of the Application, which allowed the app developers to get access to the personal data of the users – the reason as to why Alphabet shuts down Google+.

In fact, It was found in March 2018, but the information was not leaked till date. According to the Wall Street Journal, Google didn’t reveal it, fearing the devastating outcome – Google’s deteriorating reputation and the potential threat – the harm it could cause, by decreasing customer’s trust.

Google checked it a lot of times with all the developers, but didn’t find any substantial evidence, whether the developers were actually aware of the bug or not. 500,000 data of the Google+ accounts have been exposed and 438 Applications have used these API’s. This software glitch has been present since 2015. The personal information related to the customers, viz. their email ids, full names, addresses, genders, profile pictures, living places, occupations and marital statuses – all such information was being accessed.

Sources even opine that:

Developers had no idea of the bug and no API was misused by Google developers and no account was misused. In addition to this, Google+ was designed, keeping people’s privacy into account, and that’s why the API logs were present in data for a period 2 weeks only.

Is the Data in Google+ is safe?

If your account in Google+ was created between 2015 and March 2018, there might be a possible risk. Whereas, now it, is private after the bug has been found. Still, you should check the information that you input in Google+ and make it a point that your account doesn’t contain any relevant information. If any private and sensitive information is posted, please remove it as soon as possible. Make your account secure with a strong security question relating to you.

Last July, European Commission imposed a fine of $5.1 billion to Google, because Google had violated EU’s antitrust regulation. Facebook is also facing a trial in the court, where Mark Zuckerberg had to go to testify himself.

This may take some time to calm-up, approximately 10 months. Google+ is expected to be shut down till August, 2019. People may feel sad, when it will be shut down, as it is connected to Facebook, Youtube and other social media sites. That said, to ensure protection of consumer data and for increasing security reasons, Google+ needs to be shut down.

However, hope reigns supreme, and we do hope everything gets fine. With Google+ being shut down soon, CEO of Google, Sundar Pichai assured that all the accounts with them, are safe and secure and that he would take all necessary precaution towards safeguarding customer data.